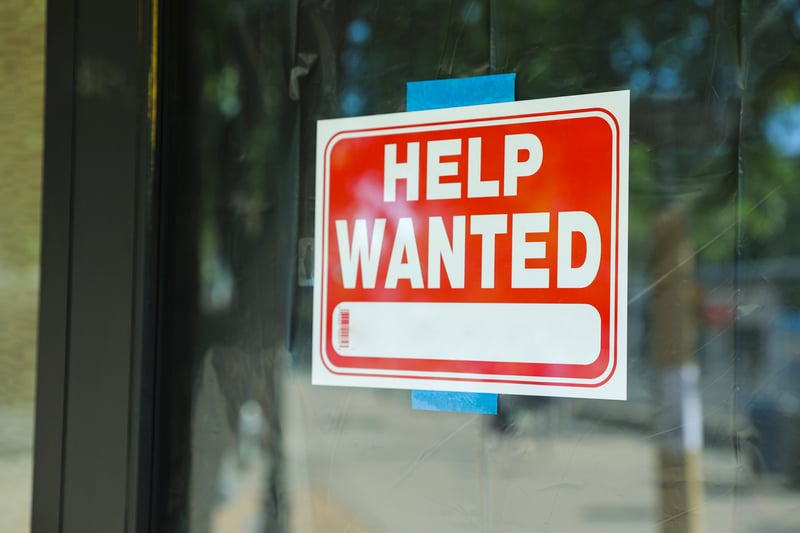 Lasting Effects of COVID on the Employment Market & Workforce Participation

As of May 30, the number of job openings in the U.S. is at an historic high of 9.2 million, as reported last week by the U.S. Bureau of Labor Statistics. This is nearly unchanged from and eclipsed only by the April 30 level of 9.3 million and almost a third higher than the pre-pandemic level, despite the high volume of currently unemployed Americans. 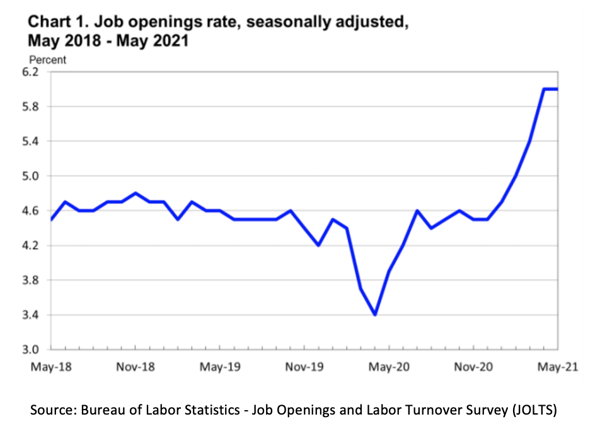 Why is labor rate participation so stubbornly low? 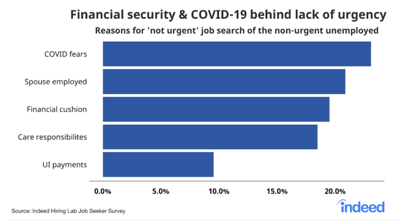 There is a lack of urgency among the unemployed in finding a new job. Survey data from Indeed indicates that fear about going to workplaces in-person while COVID-19 is still a health risk is the most commonly cited reason for the reluctance in job searching.

Additionally, as shown in the above chart, the financial security provided by government payments and extended unemployment benefits have enabled unemployed workers to be patient and more selective.

What about in those States that terminated the extended Federal benefit of $300/week?

According to a Wall Street Journal article published on July 15, the number of recipients of state unemployment benefits was falling faster in those 22 States that terminated the weekly $300 Federal benefits provided              under the American Rescue Plan Act of 2021 than in those states that did not. Citing analysis by Jeffries LLC, the article indicates that from mid-May through the week ended July 3, continuing claims were down 19.2% in states that ended the $300 enhanced payment in June and July. Over the same period, they were down 6.7% in the remaining states that are set to end benefits in September. This would suggest that the ending of enhanced aid was causing more people to take jobs.

However, data from Indeed suggests that the impact of early termination of Federal benefits has been inconclusive. Search activity has been up in some states that opted out early of Federal unemployment insurance benefits and down in others. In most of these states, search traffic initially spiked surrounding announcements of benefits ending, but those levels returned to their lower levels shortly thereafter. While the Jeffries data is encouraging, our experience at Source2 is that the impact of early termination of benefits has been modest so far.

One other factor complicating the labor force participation rate is the July 15 commencement of the enhanced Child Tax Credit (CTC) via ARPA to make additional cash payments to eligible families with children aged 17 or younger. The IRS estimates that 36 million households are in line to receive the payments, which will be sent each month until December.

Considering the importance cited by unemployed workers of “financial security” in determining the pace of returning to the workforce, this new CTC benefit may slow the growth in labor force participation.

Why is turnover so high? 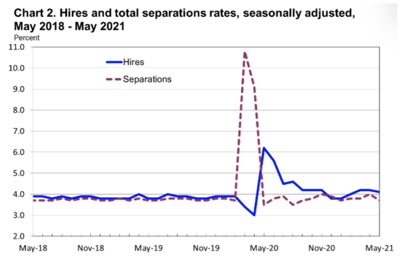 As mentioned, the number of job openings as of May 30 was near record highs of 9.2 million. Potentially more troubling is that, while the level of hiring in May 2021 was 5.9 million, the level of separations (quits and terminations) was a stunning 5.3 million in May. 68% of this turnover was voluntary quits by employees.

With employees having so much leverage in seeking opportunities, employers have also reduced firings and layoffs to a record low level of only 1.4 million in May 2021, which is down 35% from a year ago--an already very low level historically.

What does the future hold?

While many employers are desperate to quickly fill open positions, many job seekers are hesitant to start or even look for jobs at this time. Hiring will likely continue to be very challenging throughout at least July and August. 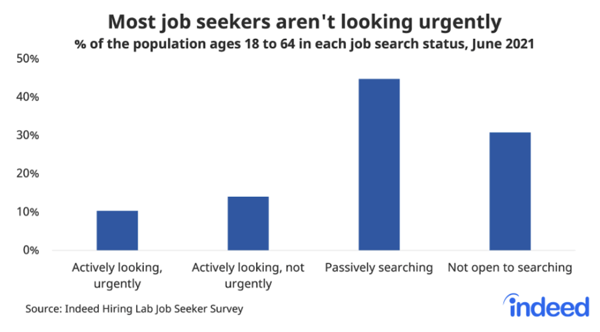 There is potential for conditions to improve within a couple of months. The Indeed survey data reveals that the lack of urgency among the unemployed may begin to subside. Unemployed workers cited certain milestones that would trigger a return to the labor market including increased COVID vaccinations, less financial flexibility with the end of extended unemployment benefits and the reduction of savings, and the re-opening of schools in the fall.

There are still some outlying unknowns:

A positive sign for employers is the BLS report on July 15 that applications for unemployment fell to a new pandemic low during the week ending July 10. That said, total employment still remains down by 6.8 million workers from the pre-pandemic level of February 2020.

Unfortunately, the labor market remains quite volatile, and this trend will likely continue for at least the next 60 days.

With 20 years of experience, Source2 been assisting clients in making recruiting a source of competitive advantage. We are fast and highly flexible in customizing solutions to meet each client’s specific needs. We encourage pilot programs as a low risk and highly accelerated approach to getting started.

For more information, check out our website. If you would like to discuss your company’s specific situation and scaling solutions, connect with our executive team by emailing us at solutions@source2.com or by completing our contact form. 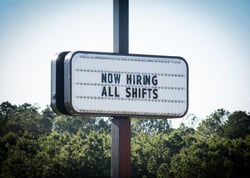 The Labor Market: A Tale of Two Realities 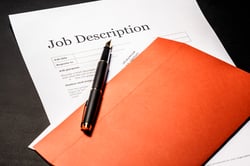 How to Create a Job Description That Converts Candidates