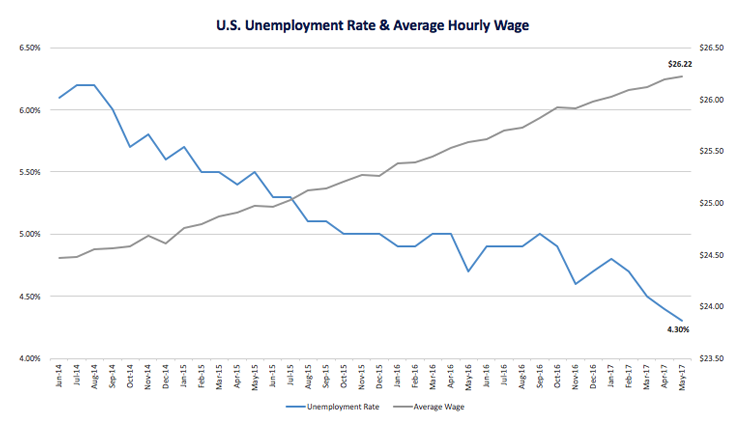 The U.S. economy created 138,000 jobs in May, and the U.S. unemployment rate fell for the 4th consecutive month to 4.3%. Wages grew three cents an hour to $26.22. Over the year, average hourly earnings have risen by 63 cents, maintaining the annualized pace of 2.5%.

Job growth in May was noticeable in the health care sector, which rose by 24,000 for the month. Hospitals added 7,000 jobs in May, and employment in ambulatory health care services continued to trend up (+13,000). Other sectors that continue to trend up are professional and business services (+38,000) and food services/drinking places (+30,000).

We expect that jobs in industries like education and utilities will see 6% growth over a ten-year period (2014–2024). Whereas, jobs in the health care industry over the same period will grow at 19%, or 3x the average.

The labor force participation rate declined by 0.2% to 62.7% in May, but has shown no clear trend over the past 12 months to indicate long-term effects on labor markets. We believe we will continue to see even more tightening of the labor supply for all sectors across the entire U.S. and an increase in new job creation.