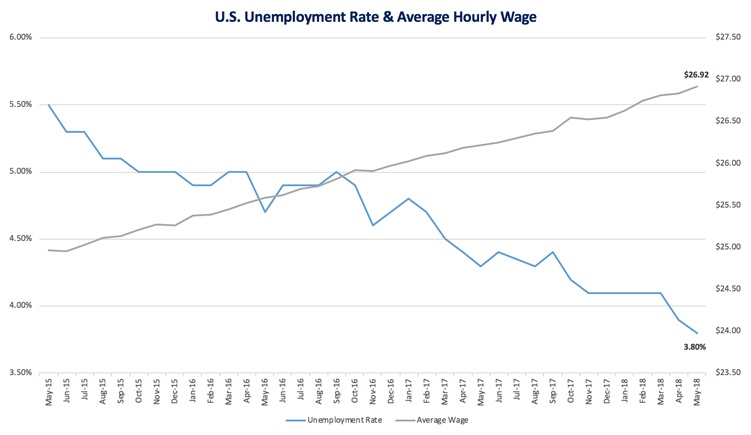 What is U.S. Unemployment Rate for May 2018?
According to the U.S. Bureau of Labor Statistics (BLS), the U.S. national unemployment rate (seasonally adjusted) for May 2018 was 3.8%. This is down 0.1% from last month, and down a total of 0.3% for the first five months of the year.

Source2 Outlook:
With the unemployment rate dropping from 4.1% to 3.8%, we find it at its lowest level since 2000. Look for it to edge down a bit further by the end of 2018, making it more difficult for  employers to find suitable candidates. The short-term unemployment rate (those unemployed for less than six months) is at its lowest level since the Korean War in 1953. Monthly initial unemployment claims are the lowest since 1969. Few companies are laying off in this climate. More people are finding full-time work, likely explaining the decline in part-time help. The number of temp workers also dropped, indicating they are finding permanent jobs as well. People currently outside the workforce are coming back in at a slower rate, offering desperate employers little relief. Finally, after being stuck at about 2.5% growth for several years, workers are finally getting bigger raises, yet another indicator of a tightening labor market

What does this mean to employers?
The construction, food services, health care, transportation and warehousing industries have scads of vacancies. Openings in health care and finance are at their highest levels in 17 years. Salaries are expected to advance to 3% by year’s end, and along with those increased wages, employers are finding it necessary to offer full-time employment, attractive benefits and innovative work environments in order to engage top talent.

Those Not in the Workforce https://www.bls.gov/web/empsit/cpseea38.htm